My Timpenny 670 yacht and the Norfolk Broads 3 Rivers Race

I have included links to some other sites with information about the Norfolk Broads in the UK for those of you who may be interested. It may be useful to look at these sites before reading the article to get a feel for the Norfolk Broads, the sailing conditions and the traditional (and extreme) boats involved.

I'd also like to take this opportunity to thank members of the Australian Timpenny Association for the advice and guidance they kindly gave to me which led to me buying my Timpenny in the first place, one of the best decisions I've made, and subsequently helped me to get her into race worthy condition.
A semi photographic guide to the Norfolk Broads
http://www.broadsnet.co.uk/

Another Norfolk Broads site with some superb detailed maps
http://www.norfolk-broads.org/index.htm
I live in Norfolk in England and, as far as I am aware, was at the time the only UK member of the Australian Timpenny yacht Association. I first learnt to sail on the Norfolk Broads as a boy over 30 years ago [now over 50 years!] and after living in various locations around England, mainly based around living near the sea and good sailing locations, moved back to the area with my young family about 10 years ago and became reacquainted with the joys and peculiarities of Broads sailing.
Those of you who are fans of the Arthur Ransome stories may have read some of the sequels to Swallows and Amazons including The Coot Club and The Big Six which are both based on the Norfolk Broads. The area is described extremely accurately in the books and both the locations and the traditional Broads sailing cruisers are still easily recognisable today. The annual 3 Rivers Race which is the focus of my article actually starts from Horning village, the home of Ransome's Norfolk characters, and in fact the sailing club which organises the 3 Rivers Race is the very one where the twins in the book, nicknamed Port & Starboard, raced their dinghy Flash with their father.
The Norfolk Broads themselves consist of about 125 miles of navigable Rivers and shallow lakes (called Broads) formed from flooded medieval peat diggings and which today are a National Park and designated Site of Special Scientific Interest as they form a wetland habitat unique in Europe. With the picturesque landscape dotted with the ruins of Windmills (or more accurately Windpumps) formerly used to drain the marshland it is also a tourist destination with a large number of hired motor cruisers plying the waters in the hands of novice mariners (making for frequent interesting encounters!).
When I first moved back to Norfolk in 1998, having spent many years sailing on the sea, my first priority was to buy a small sailing cruiser so I could rediscover the joys of Broads sailing. Broads sailing it has to be said is an entirely different matter from sea sailing and rapid tacking and dexterous close quarters boat handling are the order of the day. The first boat I bought was a little 17ft Seahawk, 2 berth, centreplate cruiser. It was a delightful little boat to sail and easily manageable in the confines of the Broads. However, it was at this point that a friend of mine mentioned the annual 3 Rivers Race which was to become something of an obsession with me and was eventually directly responsible for me becoming the proud owner of a Timpenny 670.
The 3 Rivers Race itself is the premier event in the Broads Sailing Calendar and has been run annually for the last 43 years. It consists of a race over about 50 miles (much more through the water with the large amount of tacking involved) covering 3 different Broadland Rivers, The Bure, The Ant and The Thurne. It requires you to lower and raise the mast 4 times to negotiate bridges and you can tackle the course in any order you like so as to make best use of wind and tide as long as you pass through all the checkpoints and start and finish at Horning Sailing Club. The snag is you have to complete the race within a 24 hour time limit to be classed as a finisher. Any mono-hulled sailing craft between 14 feet and 40 feet is eligible to enter (although the race is by invitation and single handing is not allowed) and the entries range from Enterprise dinghies to production grp cruisers like the Timpenny.

However, the race results tend to be dominated by 3 extreme types of dinghies and the Traditional Broads River Cruisers some of which are close to 100 years old. The extreme dinghies include two Norfolk specials, the Norfolk Punt which is a development class originally based on a traditional Norfolk duck shooting Gun Punt but now developed into a large high aspect ratio fully battened sail double ended trapeze dinghy, and the Slipstream class a large dinghy with 3 crew and twin trapezes. In recent years a couple of Thames A-Raters have also been competing. The remarkable A-Raters are even more extreme than the Norfolk classes and have been developed over the last 100 years for sailing in the tree lined reaches of the River Thames near London. At 26 feet long and weighing 750lbs they carry an enormous amount of fully battened sail on towering high- tech carbon masts and develop a phenomenal amount of power in the merest breeze. 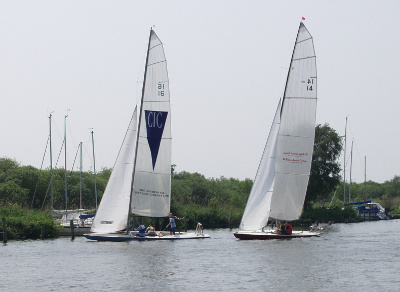 At the other end of the scale are the Traditional Broads sailing cruisers. Most of them of wooden construction, with shallow long keels, low freeboard, intimidating bowsprits, large amounts of canvas usually with a gaff rig and fitted with topsails and a lead counterbalanced mast mounted in a tabernacle for fast passage through the bridges. Evolved over 100 years to be perfect for the average Broadland conditions.
I remember as a youngster some of the older boys at school saying they had crewed in the 3 Rivers Race and been suitably impressed but had not thought of actually taking part myself. However, on purchasing my Seahawk one of my sailing friends came out to sail with me and somehow the topic came round to the 3 Rivers Race and why didn't we try it? Before I knew it I was seeking out the organisers of the race and obtained one of the coveted invitations to participate. As it happens it turned out to be the 40th anniversary of the Race that year and they had a full turnout of 140 yachts competing. Somewhat intimidating especially on the very narrow stretch of river at the start of the race. When a 35 foot river cruiser with a 10 foot bowsprit is bearing down on you with hundreds of square feet of canvas set you soon discover discretion is the better part of valour! 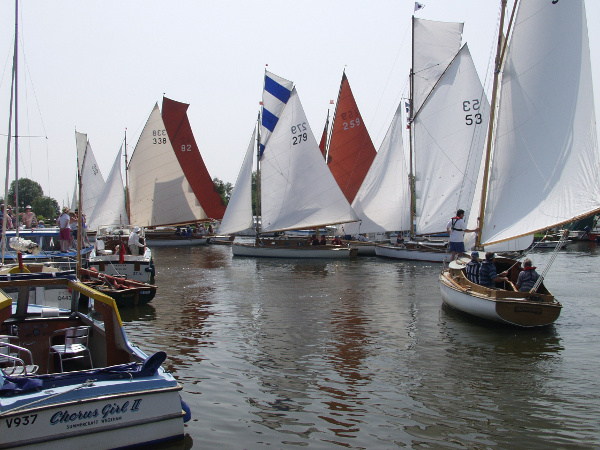 The river gets a bit crowded at the start through Horning Street - Traditional Broads sailing cruisers!

Unfortunately the day of the race dawned hot and nearly windless. After 15 hours of frustratingly slow sailing we finally retired as we drifted backwards on the tide at 3 o'clock in the morning when it was obvious we couldn't complete the course within the time limit. Oh well, next year!
The next year, again in the Seahawk, it couldn't have been more different. It was blowing a full gale and we went out under sensible storm mainsail and jib. We were flying along and were 4 hours ahead of our schedule after only 4 hours! Finishing well within the time limit was a dead certainty and, as we were travelling at hull speed most of the time, we might even get a good placing on handicap!
Unfortunately Sods law kicked in and for the first time in the 41 year history of the race the organisers decided to abandon the race! Many (over canvassed) boats had been damaged, breaking bowsprits and masts, boats were broaching out of control and hitting river banks. One large traditional broads cruiser even had his bows pushed under water by the wind pressure in his sails as a large gust hit while running downwind and actually sailed straight to the bottom of the River and had to be salvaged later!  The worry was that if this continued on these confined waters in the dark throughout the night someone would get seriously hurt.
The Race wasn't going to beat me, I had to finish at least once, even if I decide never to do it again afterwards. I decided to buy a bigger, hopefully faster, boat for the next year and an elderly Jaguar(Catalina) 22 (known in Australia as the Boomera 22?) in need of renovation was purchased. Unfortunately without sailing it first as the owner was abroad and I bought it through his broker to replace my faithful Seahawk. It had lovely accommodation with a lifting cabin top for added headroom and I thought I might even tempt the family to sleep aboard occasionally. It did need lots of work though and unfortunately because of this I had still only sailed it a couple of times on the Broad (lake) and never in the confines of the river by the time race day approached.
On the ferry trip to the race start, apart from still screwing fittings onto the boat, we found the handling in the river left a lot to be desired. The 150% genoa was not suited to these conditions and while she was excellent once going on a reach or a run she was terrible tacking in light winds especially as until way built up her bow kept bearing off uncontrollably with no response to the rudder at all. Race day dawned and, youve guessed it, light winds were the order of the day again. We deliberately held back at the start as we couldn't manoeuvre easily or confidently in the crowds of other boats. Even with the Genoa half reefed despite the light winds, to make handling quicker at the race start, tacking was a nightmare. We only lasted 9 hours this time before my crew had totally had enough and we retired again. I was deeply depressed having had such high hopes of the Jaguar and having put so much time, and money, into renovating her. I vowed in future I would never buy a boat without actually sailing it first. The Jaguar immediately went up for sale and I decided to get another sweet handling little Seahawk. 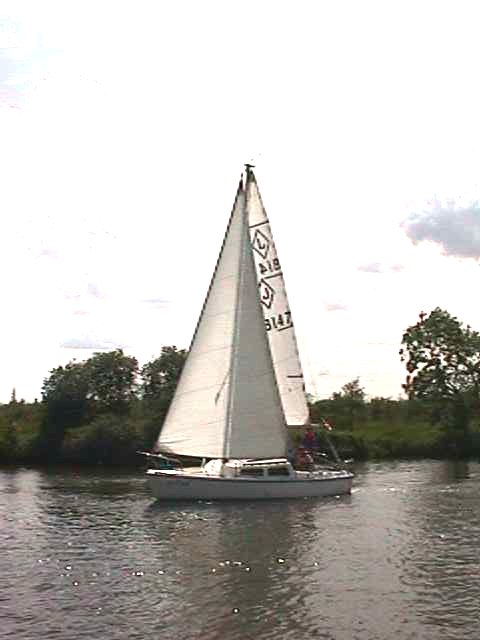 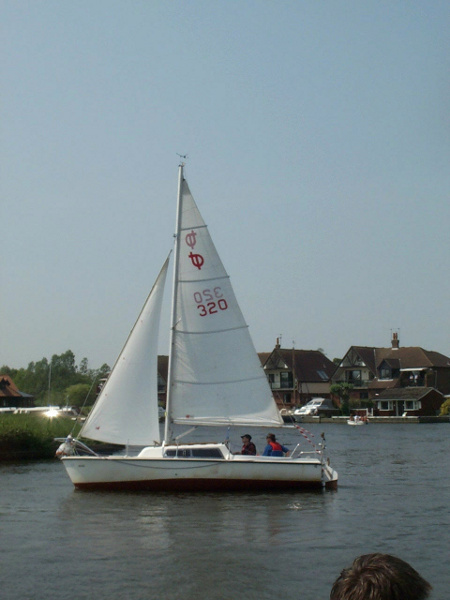 Ondine at the start of the 3 Rivers Race - Horning 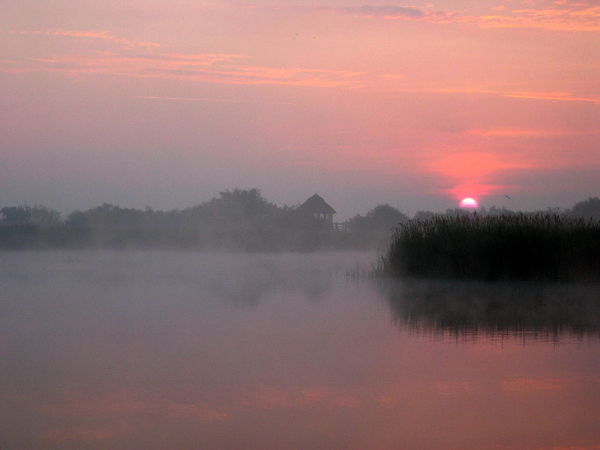 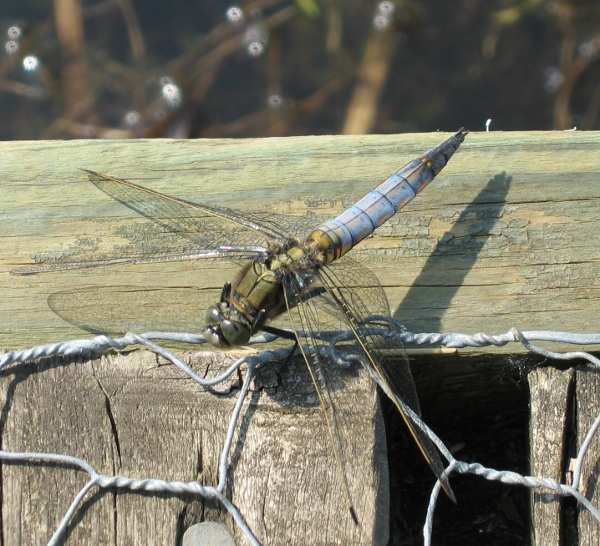 One of the Hickling residents sunning itself on the boardwalk

Postscript:
The following year I attempted the Race yet again in Ondine, crewed by my friend Keith Smith, and finally successfully completed it and received one of the coveted finishers plaques!

The year after that circumstances meant I, regretfully, had to sell Ondine but the new owner invited me, and Keith, to sail the 3 Rivers Race with him, especially as he wanted me to helm Ondine over the start line as he was nervous of the usual melee (his first attempt) and we were once again successful!

In 2011 I crewed for my good friend Doug Starr in his wooden Broads River Cruiser, Perfect Lady 9, and we once again successfully finished the race.  This time with a (very) brisk wind, which stayed with us during the evening, leading to the breakage and sinking of several other competitors, and a fast heavily canvassed boat perfectly suited to the Broads conditions, not to mention a skilled skipper, we finished in an amazing time of only 12 hours 31 minutes.  Bowling along narrow rivers in a heavy boat, complete with bowsprit, at 7 knots in the dark was quite hair raising at times!  I was sent forward to sit in the pit in front of the mast wearing a head torch to shout out if obstructions appeared and also when to tack as the bank loomed up in the dark.  Doug is an excellent sailor (e.g. He has been the Lightning dinghy National champion) and you can read his account of the race by clicking here: River Cruiser Perfect Lady 9 3RR 2011