Length 4.54m Beam 66.5cm Weight 27kg Capacity 159kg
Avg continuous comfortable cruise 3.4mph - sprint 5.5mph
An all time classic Sit on Top, relatively fast, sleek, stable, good storage, comfortable -  one of the best, most supportive moulded seats available.  That seat though is rather a close fit bucket style so may not suit those of a larger build. The Scupper Pro is often used by kayak anglers where it achieved something of a cult following. You feel like you sit in this kayak not on top of it.  In my opinion still one of the best touring Sit On Tops available - I specifically chose it over some of the newer models (e.g Ocean Kayak Prowler) for it's balance of qualities and got my local dealer to specially order it in for me.  Mine was a New Zealand moulded model which is rumoured to be of a better build spec than some moulded elsewhere.
Enough rocker to turn fairly easily (unlike many of the newer designs) and climb over waves but still tracks in a sraight line well.  Narrower beam than many Sit On Tops but still very stable. Can be fitted with rudder if required, also various padded seats and thigh straps.  Scupper plugs/bungs can be fitted on flat water to reduce "wet bottom syndrome"  but you are still going to need waterproof trousers.  There is even a Youtube video of someone rolling one of these (with thigh straps).
Similar performance to the Si Pro 149 Sit In kayak just a little slower because of the tri-form hull and scupper holes but a little more rocker and less pronounced keel at the stern means it turns a little quicker.  Unusual amongst Sit On Tops it has a large front storage hatch, secured with straps to prevent it coming off at sea and much easier and quicker to fit than the flexible rubber covers often fitted to kayaks, allowing camping gear etc to be carried out of the way inside the kayak (I'd still put gear in dry bags inside it though).  There is also an open rear storage well (Tank Well hence the TW in the name  originally for carrying Scuba tanks). I think I may have seen some versions with a second hatch at the back rather than a well, Scupper Classic?
Unfortunately I believe Ocean Kayak have stopped producing it so if you can't find an Ocean Kayaks Scupper Pro then the RTM Tempo is effectively the same kayak, may even have a couple of new features, like carrying handles moulded in, added although I believe they removed a couple of the scupper drains which also act to stiffen the hull by bridging the inner and outer skins so this may allow the bottom to flex more than the Scupper Pro.
Things I would change:  For a touring Sit On Top, not a lot.  Lighter would always be nicer but not if it's at the expense of the current solid non flexing hull. 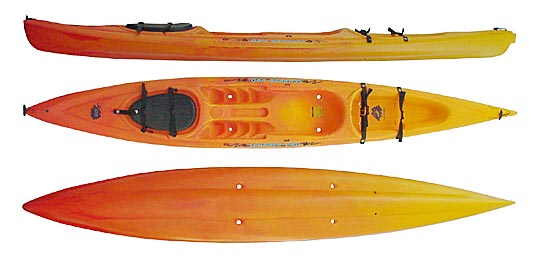