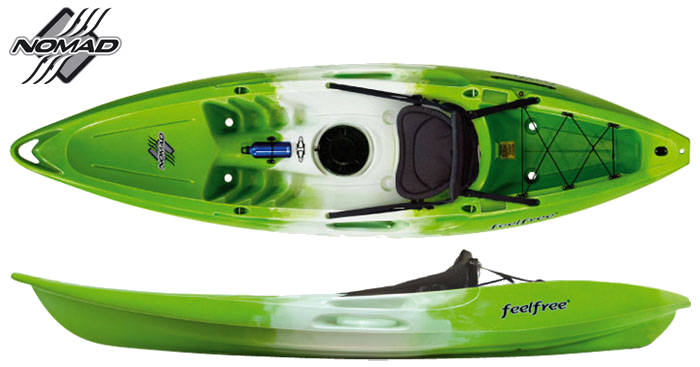 Sit-On-Tops are sometimes derided by kayak enthusiasts who will immediately tell you to get a Sit-Inside-Kayak instead but Sit-On-Tops can often be a better solution depending on what you want to use your kayak for.  The advantages of Sit-On-Tops are that they are basically unsinkable as long as all hatches are in place and they haven't been holed, will empty themselves/self drain through the scupper holes  when righted after a capsize, and are a lot easier to get into and out of onto a river bank or if needing to self rescue yourself.   You will though tend to drip water off your paddles onto your legs or lap in a Sit-On-Top  but this is also true of Sit Inside Kayak or inflatables unless you are wearing a sprayskirt/deck, so be prepared for that and either put up with it (can be refreshing in the hot summer!) or wear a light pair of breathable waterproof trousers and some neoprene wet shoes/boots.  I own, and paddle, a variety of canoes and kayaks including sophisticated composite sea kayaks (which are indeed great) but I would have no hesitation in using a Sit-on-Top and frequently do. They can be a great choice, especially for beginners, and for some people they may be the best, and only, kayak for their needs.  Finally beware, not all Sit-On-Tops are designed or built equally and they can vary from beautifully designed, well built and nicely handling craft to cheaply constructed barges so choose wisely and if at all possible try to get a test paddle in a kayak before you buy.

Compared to inflatable kayaks, which have their own advantages/disadvantages, they are more robust (see comments/warnings below about plastic types), usually easier and more efficient to paddle especially in wind, and tend to have a much longer life so can work out cheaper in the long term.  The higher quality plastic can also be plastic welded, basically using a heat gun and a stick of matching plastic, so in the unlikely event that you manage to put a hole in your kayak then the plastic can be repaired and the damage fixed.

The Feelfree Nomad Sport is probably my favourite compact, do it all, Sit-On Top-Kayak.  About as small as you can go for a full adult size boat and weighing only around 20kg but they haven't skimped on the construction.  Kayak speed is governed by the waterline length (It is a law of physics) so in general a short kayak can never be as fast as a long kayak so the Nomad will never be a speed demon but you should be able to easily maintain a brisk walking speed pace of around 2.5mph and short sprints at around 4mph (and faster when surfing).  If you want a faster Sit-On-Top for longer distance touring then you may want to take a look at something longer like the Perception Triumph 13 or, especially if predominantly for sea use, try to get hold of an old Ocean Kayak Scupper Pro.

The Nomad is constructed of a good thickness of, as far as I can ascertain, the better quality medium/high density polyethylene (MDPE/HDPE) for robustness, long life and good hull stiffness and stands up to abuse very well as witnessed by the fact that Feelfree boats are often used by hire and adventure centres where they tend to be tortured every day!  I have even seem them being used by the Royal Navy at their Dartmouth College. Beware of cheaper, lighter boats, around the same size as they are usually made of low density polyethylene (LDPE or LLDPE) which is softer and not as robust or long lived despite what some manufacturers/retailers may try to tell you.  The LDPE/LLDPE is primarily used for cheapness and because it is easier to mould, often used for washing up bowls, not because it is a better kayak material so they may look like a bargain but it is often a case of buy cheaper buy twice!

Due to the low weight and the fact it has got solid moulded in side carrying handles, as well as front and rear handles, the Nomad is easy to carry around and to get onto the car roof.  Those moulded in solid side handles, at the central balance point of the kayak, really do make a difference to being able to carry it.  It is one of the few kayaks I can lift and hold over my head to get on the car single handed.

For preference go for the optional Feelfree Deluxe Padded seat which is much more comfortable and supportive than the standard canvas seat and one of the most comfortable Sit On Top Seats I have ever used - Your back will thank you after a couple of hours on the water!  The Nomad has a handy storage compartment with a rubber sea kayak hatch and internal storage net bag located where you can get to it between your legs whilst afloat and a good size "tank well" (so named because divers carried scuba tanks in them)  at the stern handy for carrying dry bags with your picnic gear etc.  On the top sides of the kayak just behind the seat you will notice two rectangular flat areas moulded into the deck. These are ideal for mounting fishing rod holders etc.  Also on the side of the kayak just behind the seat you will notice a small tube shaped recess with a bungee cord under it.  This is your "paddle park" so so you can put the shaft of your paddle in it, hook the bungee onto the small fitting above it and it will hold your paddle for you while you take a photo, have a drink or have something to eat!  The Nomad can also be bought in a version, for a small extra charge, with a small wheel built into the skeg at the rear of the kayak.  This is handy for wheeling the kayak for short distances over flat ground but will not really help on rough ground or soft sand.  You can't add the wheel later as the wheel is built into a recess in the hull shape of the wheeled version which the non-wheeled version does not have (slightly more streamlined).  For wheeling over longer distances you are better off getting a proper kayak trolley with bigger wheels/tyres which will be far easier.  The built in wheel will also theoretically add a little extra drag to the kayak when paddling.

Although it will take a full size adult most children will find the Nomad easy enough to manage.  The rated carrying capacity is 150kg but I'd stay below not much more than 100kg or so if you want it to retain performance and not to take in more water through the scupper/drain holes than it lets out.  Heavier people may be better off looking for a larger boat wiith a little more volume as it is always important to match your body, and any expected cargo you want to carry,  weight to the volume of the boat if you want it to perform as designed.

The Nomad is very similar to an improved version of the MK I Perception Scooter kayak, I used to own but adds every improvement I would have liked to see on the Scooter and a few more besides. See my separate review for the Perception Scooter MK I - which in turn is almost identical to the cheaper Feelfree Roamer 1 - The model below the Nomad.  The Nomad tracks easily in a straight line, is comfortingly stable for absolute beginners and yet it is very manoeuvrable and will spin on a sixpence.  You can get an optional plug in skeg/fin for the Nomad but as the hull shape has a reasonable keel/skeg built into it, this is not really necessary for most people and will just make it very slow to turn.

It has a slightly sharpened bow line to aid it cutting through flat water but add a pair of the optional padded thigh straps, which work like the thigh Braces in a Sit Inside Kayak, to keep you in contact with the boat and allow you to "edge"/heel the kayak with your body and legs and it makes a pretty good boat for playing in the surf. Personally I always like to use thigh straps on Sit-On-Tops even on flat water as I feel they give you more contact with the kayak, more control and a more secure feel.  If you want a Sit On Top specifically for using in the surf then the Perception/Wavesport Scooter MKII (or a more specialised surf kayak) might be a better option for you but if you want a good all rounder then the Feelfree Nomad Sport is a great little kayak and is probably slightly more efficient at touring on flatter water due to the more defined bow and higher, slightly more protective, sides than the Scooter MKII which has a flatter more upturned bow.

If you are buying a package  version of the Nomad then, if budget allows, I would recommend opting for the Deluxe seat, a fibreglass shafted paddle (nicer and warmer on the hands than the aluminium shaft) and if possible the two part fibreglass shafted paddle.  The two part paddle is much easier to transport in the car and also has adjustable "feather angle" which means you can set it up for both right handed and left handed paddlers. Also, if you find your paddling career takes off, the two part paddle makes a handy spare "split" set for carrying on the deck when going on longer kayak expeditions and you have upgraded to an expensive carbon fibre euro paddle or hand carved a Greenland paddle!   Buying the boat in a package also usually means you save some money on buying the extras separately.

I have paddled the Feelfree Nomad on the still waters of the Norfolk Broads, on some fast flowing water, and in the waves on the North Norfolk coast (and a very similar design on the coast and estuary in Cornwall) and it was great fun and easily handled every situation. . Even though these days I have some much more expensive and sophisticated kayaks at my disposal I still enjoy paddling the stress free, and easy to get in and out of, Feelfree Nomad Sport.  Thoroughly recommended!

(note that they are using the optional thigh straps)